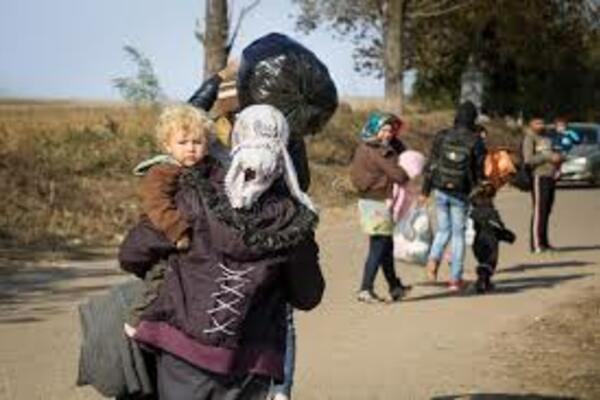 To mark Refugee Week 2022, we’ve taken a look at a case where the Mission has supported a refugee and her family from Iraq.

Nina* fled rising political tensions in her home country in 2001 and joined her husband, who had already safely made it to the UK in the previous year. She managed to get to the UK in a lorry with her 3-year-old son. She was very frightened and left absolutely everything behind. She has been through the asylum process and is now a British Citizen and is safe to be in this country. She has since had two more children.

Nina has been supported at the Mission by Michael for over 5 years now. Michael is one of our Trustees and voluntary advice workers. When Michael first met Nina, she had a husband but he has since disappeared and she doesn’t know what’s happened which is very sad for the family. It is something to do with his status as an Iraqi Kurd and she believes he might be imprisoned in Iraq but she is unsure. It has been very hard for her on her own with the children. His disappearance happened 2 years ago.

Nina had been back to Iraq for 5 months. She said “my husband had gone back and nobody was telling me anything. It had been one month, then two, then three, nobody would tell me the truth so I decided to go myself and find out what was happening and see him and see family – some people said he was in prison and after I went there, Corona was happening over there and it was horrible and I had to get home. I still don’t know where my husband is. Someone says he is in the prison for 15 years but I don’t know what’s happening or what’s going on”. Nina became upset whilst telling this story and began to cry.

Michael said her going back to Iraq had made her benefits situation a little tricky and they had to start the process again. He said they had managed to get a lot sorted before but then there were all sorts of issues including something called the benefit cap which sometimes happens in families where there are more than two children and the government say they will only give a certain amount. Michael had to work very hard to increase the benefit. He was also concerned for Nina’s oldest son who is now 18 and should be in college but he left because he wasn’t getting on so well. He wanted to look after his mum and this has an impact on child benefit. If he were to make his own claim they would be worse off as a family. They are currently appealing a PIP claim for Nina because she has extreme difficulties with her back and cannot work.

Nina has also recently been served with an eviction notice at her current property and this is very frightening for her. Michael is supporting her through it along with her housing support officer.

Michael also helps with letters she receives written in English. She cannot read or speak English very well and so he will go through her mail and explain it all to her. She said “I give so many thanks for Michael he is such a good man, for helping me so much. It makes me feel very very good to have Michael to help. Any time with appointments to see Michael I am so happy”.

Now with the housing issues she is facing and the benefits appeal, life will be a little up and down again for a short while for Nina, but we will be here to support her.
If you’d like to donate to support our work, you can do so here.